MASTER
Home
About
Get There
Register

Join us for the opening of Jack Boul: Reflections of a Post-War Europe, an exhibit of art created in reaction to the unbelievable brutality and suffering that occurred during the Holocaust.

Speakers will include artist Jack Boul and his son, David Boul.

Jack Boul was drafted into the US Army in 1945 and stationed at a German Prisoner of War camp near Pisa. As concentration camps across Europe were liberated by Allied forces, photographs of the atrocities at those camps taken by the U.S. Signal Corps were circulated among the troops. Boul remembers showing some of these photographs to the German POWs and being met with denial.

After the war, Boul studied at the Cornish School of Art and then American University, where he went on to become a Professor of Art. He began exhibiting his artwork in 1951 in both group and solo shows. Now 93 years old, Boul continues to paint every day at his studio outside Washington DC. His work -- landscapes, still life, sculpture and portraiture -- is included in many collections, including the National Gallery of Art, the San Francisco Museum of Fine Art, and the Phillips Collection.

The graphic images of concentration camps stayed with him. Later in life, the images became Boul’s inspiration to create this Holocaust series, as a way of keeping the history alive. “I thought it was important that they not be forgotten,” he said.

Other artists included in the exhibit:

David Rose, a well-known animator and courtroom artist who served in the U.S. Army Film Corps during World War II and later used his art to document sites of former concentration camps and the trail of the Spanish Inquisition;

Reidar Berge, a celebrated Norwegian painter and sculptor who lived in Nazi-occupied Norway during World War II and later created paintings centered on the atrocities of the Holocaust. 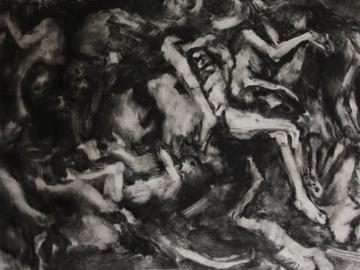