Memory, art and hell collide as an Auschwitz survivor finally confronts the horrors of his past after 50 years of silence. Marian Kołodziej, a Catholic Pole, was on one of the first transports to enter Auschwitz. He was given No. 432. He survived five years of imprisonment and never spoke of his experience until after a serious stroke in 1993. He began rehabilitation by doing pen and ink drawings depicting his horrific experience. Marian's drawings and art installations, which he called The Labyrinth, fill the large basement of the Maximilian Kolbe Church near Auschwitz. Through the blending of his testimony and graphic drawings, this documentary explores the memories and nightmares that were buried for years.

The film will be followed by Q&A with:

Fr. Ron Schmidt, the film's producer, a Jesuit priest and award-winning international documentary filmmaker whose other films include Franz Jaegerstaetter: A Man of Conscience and In Spite of Darkness: A Spiritual Encounter with Auschwitz. Fr. Schmidt has visited and filmed at Auschwitz a number of times.

Dr. Michael Berenbaum, Director of the Sigi Ziering Institute and Professor of Jewish Studies at American Jewish University. The author and editor of 20 books, Dr. Berenbaum was Project Director overseeing the creation of the United States Holocaust Memorial Museum and the first Director of its Research Institute. His work in film has won Emmy Awards and Academy Awards. 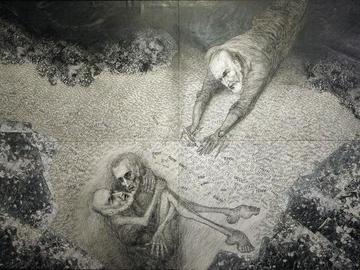