Join us for the opening of Hidden History: Recounting the Shanghai Jewish Story, which tells the little-known history of the resettled Jewish community in Shanghai. Prior to the Holocaust, the Shanghai Jewish community included 700 Sephardic Jews who arrived from Iraq in the mid-1800s as well as a few thousand Ashkenazi Jews who fled Russia. During the 1930s, Nazi violence and antisemitic policy forced German and Austrian Jewish refugees to emigrate and even though Shanghai seemed an unlikely refuge, it was one of the only countries that did not limit or deny entry to Jews. Following Japanese occupation of the city and the outbreak of World War II, many of the Jewish refugees were forced to relocate to the Shanghai Ghetto.

This exhibit paints a multifaceted story of desperation, loss, and refuge through the photographic lens of Arthur Rothstein, who documented the Shanghai Jewish community in 1946 for the United Nations, as well as vibrant artifacts from the community such as a ketubah written in Chinese, a kippah with Jewish and Chinese images, and photographs depicting daily life.

Speakers at the event will include Annie Segan, PhD, daughter of Arthur Rothstein. 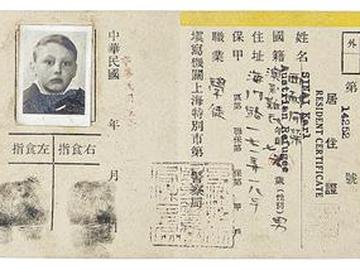