MASTER
Los Angeles Museum of the HolocaustLos Angeles, CA, United States
Home
About
Get There
Tickets

Join us for a performance by the Jewish Youth Orchestra, a community-based ensemble of musicians ages 13-17 directed by Janice Mautner Markham and dedicated to the study and performance of Jewish music, liturgical and secular, as well as music influenced by and connected to Jewish culture.

This concert is part of our programming for Violins of Hope, a project that uses a special collection of violins, violas and cellos to educate about the Holocaust and celebrate the triumph of the human spirit.

Our Violins of Hope exhibit includes 12 violins that have been restored by Amnon Weinstein and his son, Avshalom, in Tel Aviv since the end of World War II, including a violin that was played in the Auschwitz orchestra and another that was played on the Kindertransport. Some of the violins are representative of Klezmer culture. Many of the instruments are accompanied by the dramatic stories of their previous owners. 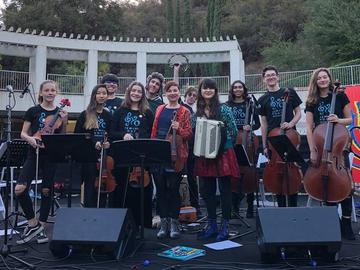